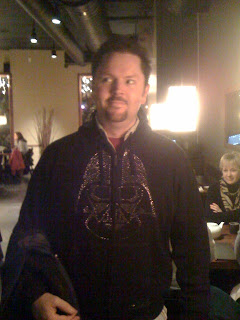 Back in Seattle again…
This time for business. Monday through Wednesday, I’m attending the MCT Summit in Redmond. I’m pretty stoked as I’ve never attended the Summit before and they are rolling out lots of training for the new products: Server 2kOcho (2008), SQL 2008, and Visual Studio 2008. I’m hoping to get some good insight into Server along with more info about Unified Message w/ Exchange 2007. Plus, hob-nobbing with Blue-badgers and other MCT’s will be fun as well.
The trip out went well. I flew out of Chicago instead of Madison, both for price and logistic reasons. Good thing as the Madison United flight got delayed 2 1/2 hrs. I splurged and used some miles to fly First Class. WOW…It really made the long flight quite enjoyable. And I don’t think I would ever say this, but I ate too much on the plane.
On the way out, I listened to about 2 1/2 hours of The 4 Hour Work Week by Tim Ferriss Very exciting and interesting book on becoming part of the NR, or New Rich, and making your life more effective. I’m hoping to weave some of the concepts like a low information diet into my daily life. I’m intrigued by the concept of outsourcing tasks so I will see if I can find some tasks that I don’t like to do which can be outsourced at an economical rate.
Once I got to town, I got my vehicle and proceed to a kitschy-cool coffee shop called Fuel coffee. Being as I’m ‘going green’, I purchased a Fuel Coffee travel mug as I’d forgotten mine at home. I got a free Americano….AWESOME espresso coffee they have!
I met Peter and Leslie for Sushi at Chiso. AMAZING…probably, the best sushi and fresh fish I’ve ever had. We had some amazing Oysters on the half shell, Tuna Belly, and Line-caught salmon, just to name a few. Sean, the amazing sushi chef at chiso, made us a speciality roll that was out of this world and all I can remember is that it had seared scallops on top! I will got there again. Being from the midwest, its very difficult to get really fresh sushi. Talking with PK and Leslie, it sounds like Chiso may get some of its catches straight from Japan. Yummmy….
Well, I had brought my GPS, but that did not help in keeping my 30 minute drive to my friend’s house in Bothell from taking 1 hr+. If you’ve ever driven in Seattle, you know the straights cross every which way, and they are very narrow. More than once, I ran into a street that was no longer a street…Oh well.
It’s 7:30am PST, but I’ve been up since about 4:30 PST due to still being on CST.